Michigan’s Arson Laws are among the Toughest in the Country 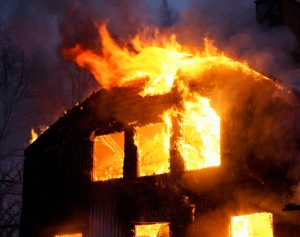 Arson is the burning of property, whether it’s a house, land, or someone’s personal possessions. In 2016 alone, there were a total of 1,738 arson offenses in Michigan, and these numbers are merely those known and reported. Arson charges are very serious and so are the penalties if you’re convicted—you could spend the rest of your life in prison. At Michigan Justice, we fight for our clients using comprehensive and thorough criminal defense strategies. If you need assistance, please don’t hesitate to contact us at (586) 221-4100. It is important that you have a lawyer ready to protect your rights should you be charged with arson.

The Different Arson Crimes in Michigan

First-degree arson is the willful or malicious burning, damaging, destroying, or explosion of the following (whether or not they are occupied):

You can also be charged for burning the contents of these structures. Ownership is also irrelevant; If you set fire to a building you own, you can still be charged and convicted of arson.

The penalty for first-degree arson is a possible life sentence and a fine up to $20,000.00

Second-Degree Arson is the willful or malicious burning, damaging, destroying, or explosion of any other dwelling not covered under first-degree arson, or its contents, regardless of whether it is was occupied.

Again, ownership doesn’t matter—a person who sets fire to their own building can still be found guilty of arson.

The maximum penalty for a second-degree arson conviction is 20 years in prison and a $20,000 fine.

Third-degree arson is the willful or malicious burning, damaging, destroying, or explosion of:

Just like first- and second-degree arson, this section applies regardless of whether the person owns the structure or personal property.

Third-degree arson penalties include up to 10 years’ imprisonment and a $20,0000 fine.

The penalty for fourth-degree arson is imprisonment for up to 5 years and a $10,000 fine.

Fifth-degree arson prohibits damage or destruction by fire or explosion of any personal property valued less than $1,000 by anyone who has one or more prior convictions. Again, it doesn’t matter who owned the property.

Fifth-degree arson is a misdemeanor punishable by up to one year in jail and a $2,000 fine.

If you’ve been charged with arson or you believe the police suspect you of arson in Michigan or Macomb County, please contact Michigan Justice at (586) 221-1400. Arson accusations must be handled with the utmost attention to detail, and that’s what we do best at Michigan Justice. Consulting with an experienced lawyer from our firm can better ensure that your rights are protected.  The head of our criminal defense department, Goran Antovski, is an accomplished defense attorney and has had many cases for and with the Macomb County Prosecutor’s Office. He will rigorously defend your rights and provide the best possible outcome for your case.